<Back to News
Varsity Basketball Wins IAAM "B" Conference Championship! 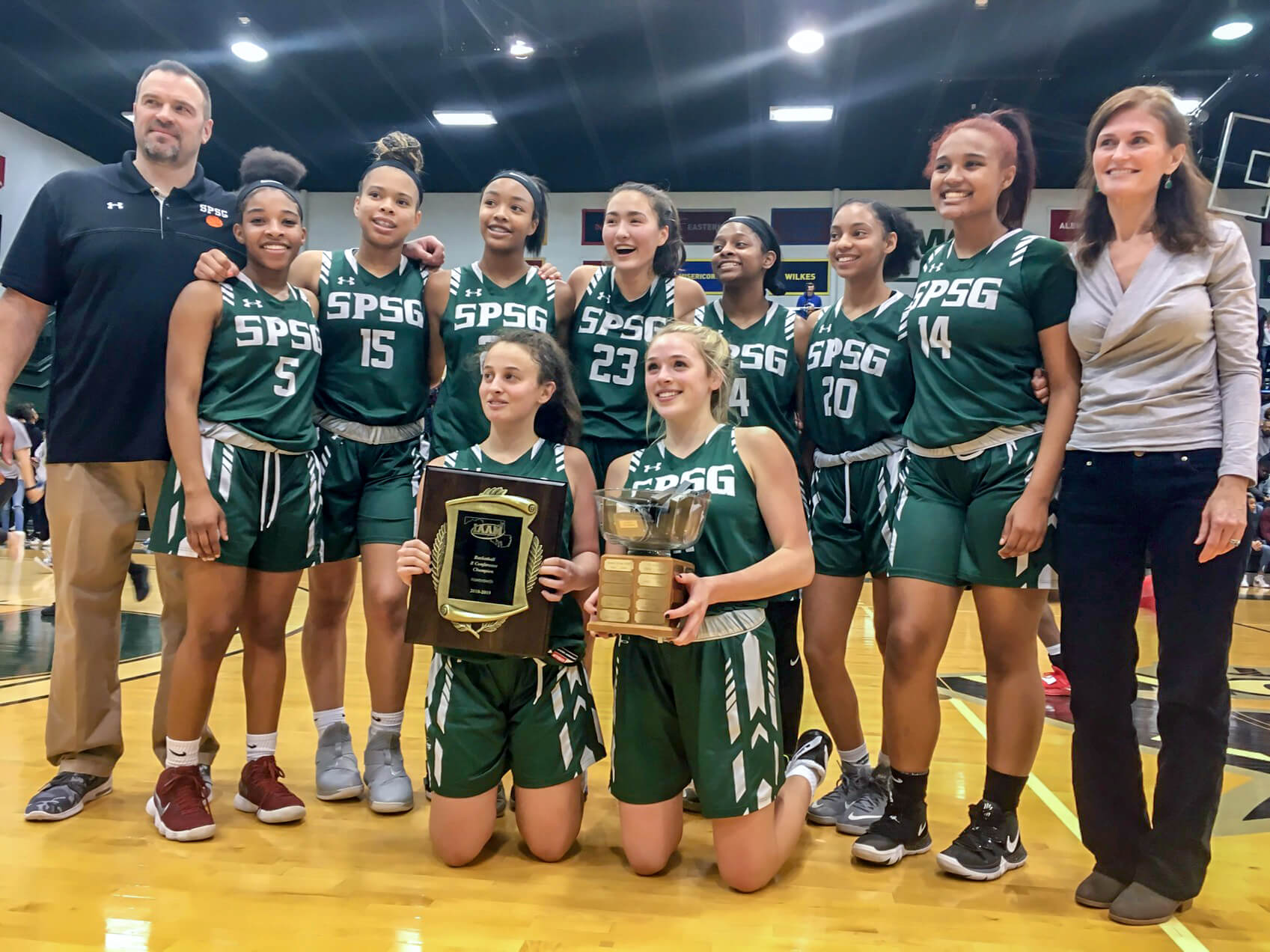 Below is the article from iaamsports.com

Click here to view a video inerview with Devan Conrad '19
St. Paul's School for Girls basketball team knew the odds were against them going into Sunday's IAAM B Conference final against Mount de Sales Academy.

The Sailors were the best team in the regular season and boasted an impressive resume.

"We had the mindset we had nothing to lose and everything to win," said Gators senior Devan Conrad.

Playing with the proverbial house money, St. Paul's hit the motherlode. The Gators defeated Mount de Sales and claimed the IAAM B crown with a 57-48 victory at Stevenson University.

The Brooklandville school led by as many as 17 points before repelling a fourth quarter Sailor charge to win its first league title since 2009 when the Gators defeated St. Mary's at Stevenson's old facility in the Greenspring area of Baltimore County.

Ten years later, the championship glass bowl is back on Falls Road after the third-seeded Gators (18-3 overall) avenged their only league losses in a scintillating 48-hour stretch. Friday, St. Paul's won at Mount Carmel in a semifinal.

"I don't want to say we were on 'Cloud Nine' because we understood there was more work to be done, but it was a big mindset turner for us," said Devan Conrad.

Ryles had a lot of "nails" that help seal Mount de Sales' fate Sunday. Alex Sawers (10 points) and senior Ava Wax were steady in the backcourt while Conrad, sophomore Espirit Cha and freshman Laurie Satchell helped by out-working the Sailors on the boards.

The Gators did an excellent job for three quarters on Zaranski, who dropped a career-high 34 points in the team's prior meeting Jan. 19 in Catonsville. She had a 3-pointer and two free throws in the opening two minutes Sunday, but didn't score again until 1:34 left in the third quarter.

"No one's helping you and you're not helping anybody else," said Conrad. "We saw in the film that as soon as the help came, they [Mount de Sales] just dumped it...we hoped we were close enough to her to make her shot difficult and quick enough not let her drive by."

While St. Paul's kept Mount de Sales' bread-and-butter 3-point game in neutral, the Gators were in rhythm early. Sawers' 3-pointer broke a 15-15 tie in the second quarter and sparked 13-4 closing run, capped with a dagger and two free throws from Ryles.

The Gators kept the momentum to the start the second half with seven straight, concluding with a 3-pointer from Devan Conrad for a 36-19 advantage with 6:36 left in the third. Zaranski got her first points since the opening period, and the Sailors began a comeback.

With Zaranski accounting for nine, Mount de Sales closed to 46-44 with 2:02 left in regulation. After sitting for part of the third, Ryles was fresh and ready for the crucial final eight minutes.